Muscle Man proceeds to open up the false gift, and the instant he touches it, the other park workers get warped to a white temple in the unknown (like the Regular Show title card) where they find the White Elephant, a giant elephant who represents the spirit of the W.E. Gift Exchange.

The White Elephant tells them they get to spent eternity at his temple, but are forbidden to open up the gifts shown. Benson apologizes for their actions today, but asks why they're not allowed to get back at him. The White Elephant claims that the W.E Gift Exchange is actually about giving gifts you don't like, not receiving gifts you like, making it fun. This makes the guys realize that all the prank gifts he offered were just his way of having a fun time. Mordecai then requests that they get sent back so they can stop Muscle Man from opening their prank gift since Muscle Man gave them a new TV. 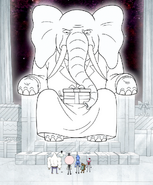 Retrieved from "https://regularshow.fandom.com/wiki/White_Elephant?oldid=371295"
Community content is available under CC-BY-SA unless otherwise noted.