Were-Skunk is the name of a character who appears only in the episode "Skunked". He sprays Rigby, turning him into a Were-Skunk, as well as making him smell horrendous. He serves as the main antagonist in Skunked. In the end, he turns back into a human after being hit by tomato paste, which is the cure for becoming a Were-Skunk. He was originally a human being, but he then became infected by skunk stench and became an arrogant, brutal skunk creature with powerful strength. Despite having a cabin as a house, he was sleeping on the road before, most likely because it is his preferred place to sleep on. He wanted Rigby to be just like him in order to share his suffering and befriend him while being hated by other people. He lied to Rigby about pineapple juice being the cure, but Mordecaieventually came to the rescue, anyway, once he managed to tell Rigby that tomato paste is the actual cure. After Rigby smashed open a can of tomato paste that splattered the entire kitchen, Rigby and the Were-Skunk were reverted to normal, and he said "thank you" and dropped on the floor. Nonetheless, Mordecai and Rigby still decided to count him as a skunk, even though he's a half-human.

The Were-Skunk looks exactly like a regular skunk, except bigger and much more humanoid. Despite his muscular appearance, his limbs appear thin. 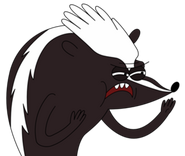