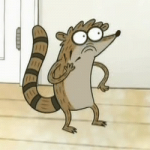 This episode was great mainly because of the individual funny parts it contained. It had some good moments from time to time, and the overall episode had an exciting plot.

Best line: Rigby - (Yells and grabs book) You're ruining my life!!! (throws book at the door, it bounces off and hits him in the face) Oww!!! (screeches in pain continually)

This episode was a good one because of the plotline and the events that happen. The call to adventure was also interesting and the montage of Mordecai and Rigby lying to the astronauts used a great song.

Best line: Rigby - Oh, really? The only thing you’re better than me at is being a big piece of- (Mordecai punches Rigby in the stomach. Meanwhile two astronauts in blue jackets go around the line and enter the restaurant.)

When I first watched the episode, it seemed like it was a Regular Show special. The plotline and events in the episode make it one of my favorites, and the way the events chronologically build up the mood of the episode adds to this as well.

Best line: Doug - Paycheck? Oh...(takes out envelope)...oh, you mean this one? Sure, take it! (He begins to hand the envelope to Rigby, but takes it back at the last second.) Ah, ah, ah! Gotta cover the finder's fee! Remember?

Fancy Restaurant is an overall good episode because of, firstly, the way Muscle Man needs improvement and seeks help from Mordecai and Rigby, who help him out of friendship. Some parts are funny and add a lot more to the episode, and the way it is set mostly in a fancy restaurant creates a good atmosphere for the theme of the episode.

This episode was one of the best specials in my opinion because of the risk Regular Show took with making Thomas a Soviet spy. The episode was exceptionally good because of the plot and the climatic moments combined with funny parts and a series plot twist.

Best line: Benson -  Grr! Natalie, I'm sorry, but you're taking this too far! This ends now! (he throws his fist towards her, but she crunches it) Ow-ow-ow-ow! First my heart, and now my hand!

Fuzzy Dice was a great episode because of the plot: to get Pops a great birthday gift at all costs. The setting of the episode in the arcade was creative and the gunfight at the end of the episode was also a nice addition to the episode.

More Smarter was good because of the different funny moments and the storyline. There wasn't a main antagonist but this didn't make the episode bad because of the other things that made it good, as well as the fact that the two main protagonists get into an unusual conflict in terms of other protagonist conflicts in the series.

9. A Bunch of Baby Ducks

This episode was a good one because of the different theme to it. The change to the impression of the ducks when they turn into the Hyperduck is a good addition to the episode.

I liked this episode party because of the Bounty Hunter, and the other minor characters, which just make the episode so much better than the simple plot makes it.

Retrieved from "https://regularshow.fandom.com/wiki/User:123DSD321?oldid=369749"
Community content is available under CC-BY-SA unless otherwise noted.