This article is about the goat intern/spy. For Death's child, see Thomas (Demon).

Thomas (real name Nikolai) is a recurring character in Regular Show. He made his debut in the Season 4 premiere "Exit 9B."

J.G. Quintel explains Thomas was created because many of the people that work on the show have been interns:

"That’s another one where I feel like a lot of people didn’t get it or didn’t see it the way we saw it. A lot of us who work on the show have been interns in our lifetimes and remember those days. As an intern – and as an unpaid intern, as most of us were – you don’t get treated with a lot of respect. You’re treated in a way that’s not overtly mean – though it can be perceived that way – but more that you’re going through the rounds of getting your chops busted, and that’s how you get into the workforce. And then people will accept you, and you’re brought up, and then you’re one of the crew, but for now, Thomas is kind of going through that phase of, 'He’s the intern!' [laughing]"[1]

J.G. later explained in an interview that the idea of Thomas becoming a spy was not planned at the beginning of Thomas' creation, but was brought up later on in the writer's room, deciding that there was more to Thomas than what the viewers knew, after seeing numerous fans online wonder if Thomas would develop more as a character.[2]

Thomas officially starts his internship in "Exit 9B," intending to work under Benson to gain easy college credit. However, when Garrett Bobby Ferguson Jr. takes over to build his freeway exit, Thomas works for him, doing chores asked by him.

Despite the beginning of the episode, where he claims he's only doing it for "college credit," when the Park turns back to normal, he decides to stick with the internship, and is officially initiated as a park employee in "Starter Pack."

Throughout Thomas's start as a park intern, he was known to be pranked a lot in "Starter Pack" by Muscle Man, which he didn't mind.

As explained in "The Real Thomas," he was a Russian spy named "Nikolai" (hinted at by his alias of "Nicholas" in "Thomas Fights Back") sent to America to infiltrate the Park and steal it for Russia using massive rockets so they could improve their parks. However, when it was discovered Russia actually blew the Park up as a way around treaties, attempting to murder anyone on it, he turned the land mass around, landmasses friends. At first at the end of the episode, he would like to be employed at the Park, however, he is unable to work there anymore due to his current status: now on the run from both the U.S and Russia. As he left to hide from U.S and Russia, Rigby says, "You'll always be Thomas to us," as they might see him again on another side.

Finally, after being able to hide his identity from both countries, Thomas did return to the park for a visit, such as attending Muscle Man's wedding disguised as an elderly man.

Thomas's final major appearance was in "Guys Night 2," where Mordecai, Rigby, Pops, Muscle Man, and Hi-Five Ghost gave him a guys night before he was to head over to the dam and go into hiding for good.

His last appearance features him sitting on the top of a Russian submarine while watching the park blast into space. It can be assumed that he is now the navy official. As seen where he raises his drink and bids his friends to space. Thomas likely became aware of an outcome where the danger lies ahead of his friends, involving Pops' origin and his relationship with his brother, Anti-Pops.

Thomas is an average-sized goat, standing at about 5'9". He has tan-colored fur, longish bangs, a small brown beard on his chin, and grey horns on top of his head. While undercover as an intern, he usually wore a black t-shirt, grey-brown pants, and red-and-white sneakers. As a spy, he has worn a ninja outfit and a black sweater.

Thomas can be viewed as the "straight-man" of the Park staff; he is usually seen tagging along with the gang on their outings and occasionally during staff meetings.

He is one of the more laid-back members of the Park. He is known for usually being oblivious towards any negative comments directed towards him, and often doesn't react to these, such as a usual running gag of being reproved by his park employees, as well as Rigby's criticisms towards his scary story everyone thought was terrible in "Terror Tales of the Park III." He also provides advice, usually to Mordecai or Rigby, albeit sometimes unhelpful. ("Wall Buddy," "I Like You Hi")

It is usually a running gag that Thomas asks a question that comes out the wrong way while he and others are in peril. These questions usually cause the gang to angrily yell out "THOMAS!" towards him. He also is known for making lame jokes, which causes the Park members to react likewise. ("Journey to the Bottom of the Crash Pit")

In reality, his intern personality was just a mask for his undercover mission. Being raised as a Russian spy, he only carries out their orders, even when he receives bad treatment from his superior, Romanoff, and his ally turned enemy, Natalia. That is until he reminisced the days of his time at the Park, such as being praised by the Park workers for saving the Park and being treated nicely when spending time with them. Revealing his current loyalty belongs to the Park, as seen that he did care for them due to their kindness to him during his act as an intern. Despite following his mission, he decides that killing them and destroying the Park are not a part of something he signed up for.

Mordecai and Rigby started to like Thomas in "Exit 9B" after saving the Park, but after he pranked them in "Starter Pack." they got angry at him. Although it didn't last long, Mordecai and Rigby have occasionally shown to not think much about Thomas positively, but they have also been on friendly terms as well, seen when they saved Thomas's life in "Cool Cubed" after he drank a very cold slushy.

Benson told Thomas he'd be a great addition to the team in "Exit 9B." However, he has occasionally been on bad terms with him, such as calling him out when the golf carts were taken in "Country Club," and due to being an intern, Benson sometimes doesn't see much use in Thomas to a point where he was ready to fire him in "Thomas Fights Back." However, he has occasionally seen him as a valuable member, especially after "Thomas Fights Back."

Due to being an intern, Thomas is usually bullied by Muscle Man, and likewise, Thomas has shown some negativity towards Muscle Man, such as not wanting to help him in "Trailer Trashed" because he didn't know him that well, as well as putting him in a headlock after being called a "Momma's boy" in "Thomas Fights Back". However, they have treated each other with respect, such as Muscle Man helping him out in "Country Club," Thomas seeming worried about him in "Sleep Fighter," and in "New Year's Kiss" when Rigby said Thomas' resolution was lame, he told Rigby to give Thomas respect. After returning from hiding, Muscle Man begins to see how cool Thomas is and gets emotional when he has to leave them.

Skips and Thomas haven't interacted much; however, in "Starter Pack" he told Mordecai and Rigby to let Thomas fight his own battles. Skips has yelled at him with the others before, but has also been on friendly terms with him, such as in "Country Club" when he stops Benson from yelling at Thomas.

Pops and Thomas haven't interacted much, but, although Pops does yell at Thomas like the rest park workers sometimes, they have worked together and have been on good terms. After Thomas became a navy and sown this en the park which includes his friends and Eileen are launched to space while he bidding his friend good luck, Thomas is now likely aware of Pops' origins as the Chosen One.

Cody is a "friend" of Thomas in Expert or Liar, which the latter claims are an intern at a said game show. It is never revealed how Cody and Thomas met and what their true relationship status is; if Cody is aware of Thomas' true nature or if he’s possibly another spy or robot helping him out on his undercover mission.

In "Exit 9B" and "Starter Pack," Thomas was seen speaking to his mom via cell phone, and she wasn't heard from again until she made her first official appearance in "The Thanksgiving Special." It is revealed in "The Real Thomas" that Thomas' mom seen in the aforementioned special is the "mom" he was seen speaking to in "Exit 9B" and "Starter Pack" was a ministry in Russia, known as "M.O.M.M." which stands for "Ministry of Mental Management." 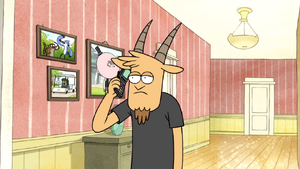 The gallery for Thomas can be viewed here.