The Master Prank Caller is a minor character in Regular Show. He made his debut in the Season One episode "Prank Callers".

The Master Prank Caller, as his name suggests, is the master of prank calls. He can prank anyone at anytime by talking to them on a phone. He is a large 80's style cell phone with human arms and legs. He is later revealed to be a man in cell phone armour, although he most likely is of inhuman origin because he is capable of performing strange feats of magic - just by dialing numbers on himself, he can get anything he wants (limo, 80's clothes, etc.). He can even send prank-callers he pranks to various years in the past. He also (underneath his phone armour) vaguely resembles an alien like ET.

He first appears in the episode "Prank Callers", pranking an old lady on the internet. Mordecai and Rigby decide to be prank-callers like him and try to prank him. However, it goes wrong and they are transported to 1982 by him. They try to return to the present by sending Benson, Pops, and Skips there to help them prank the Master Prank Caller. After a long chase, they stop him and return to the present through a place filled with doors and a specific year is labeled above each. They find the door, and before they go home, listen to a heartfelt speech from the Master Prank Caller's decaying body. In the end of the episode, Mordecai, Rigby, and the Master Prank Caller became acquaintances, and all three prank called Benson.

The Master Prank Caller is a white 80's-esque cellphone, and has human arms and legs. It is later revealed that he is a decaying body inside. 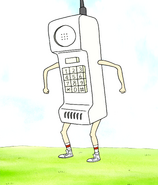