Rage Against the TV

The Hammer is the boss of the video game Mordecai and Rigby played in "Rage Against the TV" and the main antagonist of the episode. He also appeared in Exit 9B. and Expert or Liar.

The Hammer is the final boss of a nameless video game about a Karate Duo going through levels while having to defeat enemies, such as the Triple Thugs and the Big Pink Monster, who can only be defeated by "kicking them in the junk", which means to literally kick them in the pile of garbage they're carrying. The Hammer is the final boss in the game. He is invulnerable to regular attacks and takes away a whole life with a single attack. He can only be damaged when he's hit with furniture.﻿ While starting to play the game on a mysterious foreign television, A blackout occurred, the TV, game system, controllers, and plugs came to life and formed a blue holographic body around it, creating a physical form in the real world for the Hammer, who quickly proceeded to beat up Mordecai, Rigby, Pops, Skips, Muscle Man, and Hi Five Ghost. Even as far as killing Jimmy. Mordecai eventually remembered that furniture was the only way to beat him, so everyone grabbed anything they could find and started to hit the Hammer with it. Just as the Hammer was about to come down on Skips, Mordecai threw a chair to Skips, and the Hammer hit his crotch on the back of the chair. Mordecai and Rigby then killed him once and for all by pinning him down, grabbing the control pads in his hands, and defeating him in the game. And the city's power came back on.

In "Exit 9B", he is revived by Garrett Bobby Ferguson Jr. He is seen fighting the God of Basketball during the episode. However, he was sent back into the portal to the afterlife after Thomas signed the document that made the park a historical landmark.

In "Expert or Liar", he appears in a video game obstacle course testing Rigby's knowledge of video games. Rigby correctly answers that his weakness is furniture and moves on. 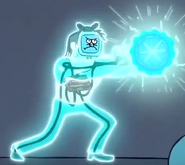 The Hammer fires an energy ball.

Retrieved from "https://regularshow.fandom.com/wiki/The_Hammer?oldid=376210"
Community content is available under CC-BY-SA unless otherwise noted.