Teddy and Tina are the main antagonists of the episode "Married and Broke."

In the episode, Teddy and Tina are a couple who are portrayed as loving the U.S.A. a lot. They like the U.S.A. so much, in fact, that they're using their patriotism to win over the audience. During the game show, Teddy and Tina successfully complete every course with their athletics.

During the middle of the game, they successfully overtake Muscle Man and Starla due to their athleticism. As Muscle Man and Starla embrace a powerful kiss, they turn into a giant glowing crystal that will destroy anything in its path. Teddy and Tina see this, and they attempt to go as fast as they can to reach the goal. At the very end of the course, the two couples appear to have pressed the goal button at the same time. However, during the slo-mo footage, it turns out that Tina had pressed the button first by using her pinky finger, which has an extended fingernail. Because of this, Teddy and Tina are the winners of Married and Broke.

As they chant "U.S.A.!", Muslce Man notices something suspicious. He realizes that every time they say U.S.A., they utter "eh." This revelation is soon heard by the entire audience as well. Teddy and Tina then admit that they're not Americans, they're Canadians. They also reveal that they were maple farmers who moved to America because they wanted to win this game show in order to have an American wedding. With these words coming out of the confessing Canadians, the game show host tearfully tells security to get Teddy and Tina out of his sight and eliminates them, thus making Muscle Man and Starla the apparent winners. 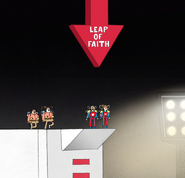