An outfit which is simply called as Suit is a suit-like cybernetic talking exo-suit that Benson wears in "Benson's Suit".

He was created by his father, a tailor, to serve an evil boss like Rich Steve. His father refused to accept $10 since it was not enough, so Rich took the suit by force and killed his father along with Rich's guards. He later escaped from Rich after his father died, until Benson found him and wore it without knowing who the suit was. Thought to be an ordinary suit and quickly dirty the next day, the suit cleaned himself suddenly and recently appeared in front of Benson. He later revealed to Benson who he was and praised Benson as a worthy boss. He then claimed that he would help him to manage slackers like Mordecai and Rigby. When Rich Steve found him, the suit and Benson fought back and defeated Rich Steve. In the end, knowing so many evil bosses are after him, he tells Benson to "wash" him in the washing machine in Inferno Mode, but before he is "washed" for the greater good of peaceful kind, they admit that they will never forget their times together. 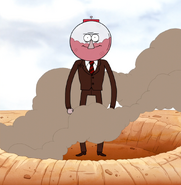