View source
watch 02:07
Spider-Man: No Way Home Trailer Dropped - The Loop
Do you like this video?
Play Sound

The Spark Initiative was a Program created by Dr. Dome and later directed by Dr Reuben Langer. SPARK may have been a combination of Space and Park, as said by Benson, but it could also just be a code name or possibly even an acronym. The Goal of the Spark initiative was to bring different parks around the world into space, parking them in The Space Tree. The USA'S Representation of SPARK was The Park, who's owner, Mr Maellard signed an agreement with current SPARK director, Reuben Langer. The SPARK initiative first contacted the park in episode: "The Dome Experiment." after the events of this episode, the dome was removed, but was introduced by Langer in "The Button" , most likely on order of Maellard. Once the Dome was completed, a button was. This button would launch you into space. Multiple parks were taken from different countries such as Jamaica, The Vatican City and India. While Spark Initiative's intentions seemed villainous, it was actually for a good cause, bringing Pops, the chosen one into space. After the purpose of SPARK initiative was complete, the park was sent back to Earth. 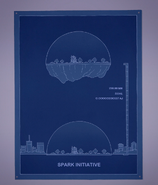