The Pilot (unofficial)
The Power (official)

Skips, originally known as Walks, is one of the seven main characters in Regular Show. He is an immortal yeti who works at the park as a groundskeeper. He helps Benson a lot, and fixes many of Mordecai and Rigby's mistakes. He is very wise, and has a knowledge of many things to those of the unknown, due to his past of immortality. Skips made his first appearance in the pilot. Skips is voiced by Mark Hamill.

Skips (formerly known as Walks) is born somewhere in the 18th or 19th Century. During his teenage times, he gone many adventures with his friend, Techmo including going into a Timenado that takes him to the present. He is also been expelled from different high school for making fights and remain aloof from his record. In the latest school he joined, he is given a stern warning not to make fights in school or else he will be expelled again

In 1814 He made friends with Gareth and the Guardians of Eternal Youth but got in trouble with Klorgbane as Klorgbane bully Walks' friends. As they were about to fight, the Headmaster intervenes but the fight between them isn't over. During his break, he sit with a classmate named Desdemona or Mona for short and made friends with her. However, she promptly left as Walks discuss with his friends on fighting Klorgbane because Mona dislike fighting. This cause Walks to not fight.

Soon over school times, Walks relationship with Mona grew as Mona teach Walks many skills, go on dates and skip together. Meanwhile, the school is suffering under Klorgbane bully which Walks wants to intervene. However, if he fight Klorgbane, Mona will leave him and he will be expelled from school. Gareth console Walks that they will find a suitable time and location, but the time is the prom which Walks reluctantly agree due to the only time Klorgbane accepts.

Walks bring Mona to the prom and have a party but was reminded by Gareth to join the fight. However, Klorgbane being impatient intercept the prom and challenge Walks for a fight. With Mona's blessing, Walks engage Klorgbane but the latter is immune to punches. His friends tried to help but was defeated. During the chaos, a rubble collapsed onto Mona and killing her in front of Walk's eyes. Gareth managed to bring the Fists of Justice to Walks, he uses it to fight Klorgbane effectively and punch him out to space. He went back to check on Mona but the only thing left is the necklace Walks gave to her. This devastated Walks as she was the only one he cared about.

Years later, he is invited to the Guardians of Eternal Youth once more to makes Walks immortal as they need him to defeat Klorgbane who will come back every 157 years. The only condition is to change his name, Walks remember his old days with Mona and change his name to Skips. After that he becomes immortal, but he also have to perform a dance on his birthday to sustain his immortality. It also started to work on Mr Maellard's park once he is immortal, Skips worked on about 2 centuries before meeting with new park members like Benson, Muscle Man and High Five Ghost and finally Mordecai and Rigby.

Skips is a yeti wearing only blue jeans with a brown belt. He closely resembles a gorilla. He has large muscles and abs, small hands, and eyes with yellowish sclera. He has white hair all over his body except for his hands, feet, chest area and his face. It was revealed in Bald Spot that he lost some of his hair, presumably before he became immortal, so he styles his hair into a combover. He is 505 at the series' beginning and 512 at the end.

Because he is immortal, Skips' appearance remained unchanged during the time montage and the Park's 25 year reunion, with the only difference being that he now wears cut jean shorts.

When Skips was still going by the name as Walks, he is a teenage yeti that is fun-loving, energetic, reckless, loves to spend his time with his close friend Techmo in doing risk-taking things, being immature, and most of all getting into fights with students who pisses him off.

However, Skip's nature slowly changes when he met the love of his life, who made him realized that violence will never be the solution to every problems in life, Skips nature changes utterly after the death of his lover, this causes Skips to mature and act differently from his past-self. Being a person who is now calm, serious, and desires to live a quite and normal life.

He has an interesting and mysterious past due to his immortality. Everybody relies on him to solve supernatural problems, and he almost always has the answer. There have only been a few occasions where he didn't know what to do, such as in "Brain Eraser" when, although he knew how to delete Mordecai's memory of Pops' nudity, he didn't know how to exit the video tape. He also couldn't fix error 219 on Mordecai and Rigby's computer. In "Skunked", his best ideas (a shower and coffee) didn't work, and in "Sugar Rush" he said to give Pops more sugar to stop his sugar rush when this only made it worse. However, Rigby knew what to do by giving him the opposite of more sugar: Benson's whole wheat donut. Skips also admits that he doesn't know what's wrong with Rigby in "This Is My Jam ", and even goes so far as to give advice that indirectly worsens the situation.

Skips is often quiet and is one of the least vocal characters of the show, spending the majority of his spare time working out in the golf cart garage which doubles as his home. Despite his monotone expressions, he can be seen having a good time joking around, such as in "This Is My Jam", where he jokes with Mordecai and Rigby that he knew everything, though admits afterwards that he only knew about their plan because he was "in the can" while they were talking about it. Skips has great self-esteem and pride in his knowledge and strength, once going so far as to kill Rigby when he beat Skips at arm wrestling.

He is considerably friendly with the other groundskeepers, and seems to be good friends with Benson, convincing him to take a break in "Party Pete" due to the stress he was going through. Overall, he's always willing to assist anybody that needs him and his expertise, despite how annoyed with the situation he might be. Skips rarely ever walks or runs, but when he is punched in the face by the bouncer at Carrey O'Key's, he runs after his attacker, and throws him into a table, which breaks with the force of Carl/The Bouncer's weight and he walks while Benson is driving the cart to pull Rigby's head out of the black hole in "First Day".

Mordecai has a better relationship with Skips than Rigby does, and displays friendship and responsibility towards him. Mordecai always looks toward Skips for any help of any matter, with the presumption that Skips can fix anything with his seemingly infinite wisdom, except computers. In one instance, Mordecai voluntarily sacrifices the chocolate cake he and Rigby wanted so badly to save Skips from dying in the episode "Free Cake."

Skips behaves slightly more negatively toward Rigby, and as a result, less friendly. Skips knows that it's usually Rigby's fault for all sorts of horrible events that occur, but always remains patient enough to fix the problem and teach both him and Mordecai a lesson. Skips does not approve of Rigby's immature behavior, one time going as far as to kill him. Skips is shown to have a little bit of respect for Rigby, though, when he tries to bring back his life by winning an arm wrestling match and when he breaks his own hand so that Rigby could play in a video game tournament with Mordecai. He also gave Rigby advice on being truthful about cheating on a bet, and even in social outings with the other Park Employees.

Even though Skips is employed by Benson, the two are at least friends, if not good friends. As seen in "Meat Your Maker", Skips chugs soda while Benson and Pops cheer him on. Benson has the utmost respect for Skips, as he is a hard worker and very dependable. Benson left Skips in charge while he took the day off in "Party Pete" without realizing he was going to let Mordecai and Rigby have their party anyway.

Pops and Skips do not interact too much on screen throughout the series. It is shown in "Skips vs. Technology" that he has known Pops as a child. Although they don't hate each other, Skips, being deep and knowledgeable, may be bored with Pops' childish, overly free-spirited attitude. He warns Mordecai and Rigby not to teach him words he shouldn't use.﻿﻿

They do not talk much in the series but seem to be good friends. Like in "Under the Hood," Muscle Man gives Skips saucy chicken wings from Wing Kingdom and in "The Christmas Special," Muscle Man complimented Skips on how good his Christmas cookies were and tells him about a bakery Muscle Man goes to.

Techmo is one of Skips' friends from the American Revolution. When Techmo lost his arm fighting, Skips gave him an arm made of wood. Like Skips, Techmo was also given immortality and he was the only one who greeted Skips upon his return in the finale.

The Guardians granted Skips his eternal youth, but only if he does his spirit dance every year on his birthday. The Guardians also helped Skips and others to save the park in Exit 9B.

Skips and Thomas haven't interacted much; however, in "Starter Pack" he told Mordecai and Rigby to let Thomas fight his own battles. Skips has yelled at him with the others before, but has also been on friendly terms with him, such as in "Country Club" when he stops Benson from yelling at Thomas.

In Diary, it was revealed that Skips had a woman who used to skip with him every day, but he lost her due to her sacrificing herself to save him from Klorgbane. Because of this, he vowed to skip both night and day for the rest of his life, and he then changed his name from Walks to Skips.

Death is one of Skips' eternal lifelong frenemies. Their long time rivalry could simply be due to Death being the Grim Reaper, and therefore his job is to have people to pass when their time comes. However, since Skips struck a deal with the Guardians of Eternal Youth, he has been granted immortality, thus making Death's job even harder than it already is. Death has also attempted to reveal Skips' true name (Walks) to his friends in Skips Strikes, and has played against him in a Dodgeball Tournament. Their rivalry might not be as fierce at first glance. In "Exit 9B", he is shown helping the Park Workers fight against Garrett Bobby Ferguson, Jr.. Death was also invited to both Muscle Man's wedding and Pop's party in Cheer Up Pops, and has helped fight against Streaming in A Regular Epic Final Battle.

Like Death, Klorgbane is one of Skips' enemies. Every 157 years, Skips must defeat Klorgbane or the world will end. In "Skips' Story", it is revealed that they knew each other from high school. Klorgbane was the school bully, and was responsible for Mona's death. 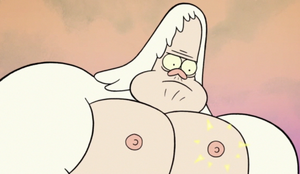 The gallery for Skips can be viewed here.