Sad Sax Guy is a minor character that appeared in the episode Sad Sax with a major role. He tries to help Mordecai when depressed or confused.

Not much is known about him, but when Mordecai was in Art School, Mordecai went to him for advice, and Sad Sax Guy told him to imagine the sculpture instructor's 'human form', but happened to fail, as Rigby mentioned that he's never actually helped him.

More recently, Mordecai went to Sad Sax Guy after a missletoe incident, Sad Sax Guy told him he knew a guy that could get Mordecai back with CJ, but she thought it was lame and it didn't work, he tried some other stuff out with him, such as cheerleading and getting hit by a bus, which didn't work. Then Rigby reveals that he's known for giving the worse advices to people. When his last advice of Margaret talking to CJ didn't work, he revealed that he doesn't know anything and only tells people what to do so he can feel better about himself and admits that he's a hot mess. Then Sad Sax Guy actually gave him some good advice and told him to go and speak to his mom, and her advice worked.

Sad Sax Guy has a short mustache and a mullet, he wears nothing on his top half except for some braces, he appears to also have a six pack. He wears black pants and a saxaphone is always in his hand. 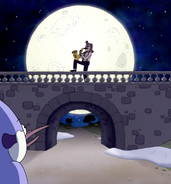 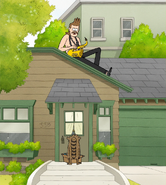