View source
watch 01:33
House of the Dragon Trailer - The Loop
Do you like this video?
Play Sound

Ride 'Em Rigby is the ninth Regular Show game released on the Cartoon Network website. The game is also available for iOS. This game is based on Muscle Mentor.

In the iOS version, a "Challenge Mode" was added in addition to the endless mode. This mode involves completing separate levels (called "miles" in the game) instead of running endlessly. Otherwise, the gameplay is mostly the same. There are 20 levels in the challenge mode.  At the end of a level, the player is awarded with a rank of 1-3 stars and will earn extra points depending on how they did in the level. 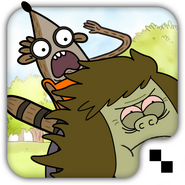