Park Avenue (a.k.a. Park Ave.) was a minor character and the main antagonist in "Under the Hood".

The duo managed to escape from the monsters and headed into Park Avenue's invisible house. Park Avenue was eventually forced to confess to Benson, Muscle Man, and Hi Five Ghost (who were framed for it) that he was the one that painted all over the park, and Benson threatened to call the police on him. Park Avenue attempted to escape through a portal, but he got stuck halfway through while Benson dialed up the cops. He was presumably arrested for his crimes.

Park Avenue is particularly sensitive toward art, praising his own work while dismissing other works as atrocious and lacking class. He exhibits a large amount of pride in himself throughout the episode. The episode also shows that he is a good graffiti artist and very rebellious.

He wears a black hoodie with white straps, gray pants, and a knapsack that goes around his chest. He wears his hood over his head for the most part, but under the hood, his head is a spray paint can top where the nozzle moves to mimic facial expressions. The can that holds his paint is mostly covered by his hoodie.

"Come on man, not the coffee table!"

"Yeah, but it's different you know, that's what I do!"

"I've been pulling this scam all over the country." 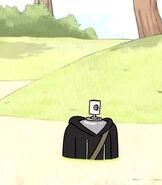