Pam Dunwoody is a character in Regular Show. She first appeared in "The Dome Experiment". She is one of the scientists to study the park workers. She and Benson formed a relationship in "Pam I Am", but they had to break up in "Fries Night" due to Benson being in space and not knowing either when or if he's coming back to Earth. Though after Benson returns with the remaining Park workers minus the deceased Pops, they got back together and rekindled their relationship and eventually married.

Like all the other dome scientists, she wears a white lab coat and yellow gloves. She also wears grey pants and tall black boots. She has long light brown hair and wears circular kind of glasses. When she takes off her lab coat, she wears a white tank top. After married to Benson for 25 years, she now wears a blue dress with yellow flower patterns and doesn't wear her glasses anymore.

Pam showed herself to be a kind person as she was nice to the park workers.

Pam and Benson started off as friends, as seen when they first meet. They soon get together in "Pam I Am", where she asks him out and they become a couple. She broke up with him in "Fries Night", since she couldn't handle a long distance relationship though stated she still liked him. However, she married him in the years after the park dome returned to Earth and was seen being happy with him. 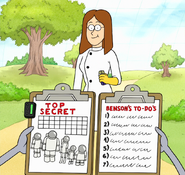