Negative Rigby (also known as Ybgir) is an inter-dimensional demon who appears in the Season Two episode "Jinx" as the main antagonist for the episode after Rigby attempts to get rid of his jinx.

In "Jinx", Negative Rigby was freed by Rigby in the Restroom Building after Muscle Man jokingly told him it'd break his Jinx. After trying and failing to get people to say his name three times, Rigby was willing to do whatever it took to remove his curse. While he expected to be unjinxed by writing and reading his name in a steamy bathroom, Rigby unleased Negative Rigby into The Park. Negative Rigby immediately attacked everything sight and infected bystanders with his influence. It was only when Mordecai and Rigby tricked him into running into the same mirror that trapped him in the first place was Negative Rigby returned to the Mirror Dimension.

Negative Rigby looks like a monstrous, muscular Rigby, though this may not be its true form, as it will become whatever species the person trying to break the jinx is. It has purple eyes, black skin/fur, yellow fangs, and white outlines, giving the appeal that the monster is in a negative art style.

Apart from being insanely strong and fast, Negative Rigby has an ability similar to that of werewolves. Anyone scratched by him turn into a negative demon like him, and spreads his influence. They turn black and white, grow body hair and claws, and become extremely aggressive. Negative Rigby seems to be able to rally these Zombies by using his piercing howl. The only drawback to his abilities is that they seem to have no effect other than amnesia after Negative Rigby returns to the mirror dimension. 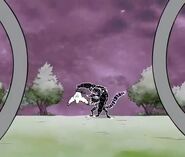