Natalia is a minor character in Regular Show. She is the primary of the two antagonists in "The Real Thomas". She was a Russian spy who went undercover as Benson's new girlfriend.

Natalia first appears in “The Real Thomas", where she is introduced by Benson as his new girlfriend. He says she is a schoolteacher named "Natalie" and announces to the staff that their only jobs are to stay out of his way while he shows his date around the park. Meanwhile, Rigby becomes suspicious of Thomas and eventually convinces Mordecai and Muscle Man after finding a secret room in the AV room where Pops and Skips are tied up. Before they can help Benson, however, Natalia puts him in handcuffs and pushes him into the secret room.

Natalia explains that she's a Russian spy and that one of the park's own staff has been working there undercover for two years. Benson, even more confused, questions who. On cue, Natalia reveals it to be Thomas - whose real name is "Nikolai". Thomas, in a Russian accent, reveals he is a Russian spy as well.

Thomas explains that the parks in Russia are outdated and that Natalia and himself were sent to infiltrate an American park. Natalia announces their new orders from General Romanoff and they depart, taking the park crew hostage. Natalia then reveals to Thomas their true plans: to bypass the U.S-Russia Nuclear Arms Treaty (which calls for Russia to never fire a missile at the U.S.A and vice versa) and bring a part of the U.S to their missile, starting and finishing with the chunk of the park, which would in turn start World War III. Nicolai, completely unaware of this ulterior motive, is horrified as he never intended to hurt anyone. Thomas then realizes that the park was like a home to him and can't go through with the plan. He and Natalie struggle for the remote, during which time Natalia falls out of the open hatch to her death (she is eaten whole by a whale).

When Benson sees her get eaten, he cries out for her (as he believed that they could've worked their issue out), only to be reminded by Mordecai that she tried to kill them.

Natalia is introduced wearing a light blue cardigan over a white shirt and a purple pleated shirt. Her blonde hair is tied back into a pony tail.

After she reveals that she is a Russian spy, Natalia wars her hair up and over her face and changed into a brownish-green suit with a zipper and black high-heeled boots.

Goof: Natalia is missing her lipstick.
(Only occurence) 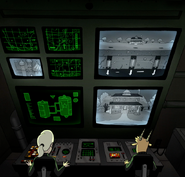