The Magical Elements, is the name of the magical sporting team that consists of, The Guardians of Eternal Youth's leader Reginald, (who has grown since he was last seen and is evidently called "GB" according to the scoring card), Gary, Death and the Wizard. The team is banned from using magic, hence their name, but they cheat and use it anyway to try and win. The team had been champions for hundreds of years, according to the Guardian of Eternal Youth. As seen in a cut scene in Skips Strikes, and more than likely a flashback, Skips was a former Magical Elements member. This is not confirmed, though.

The team name stays the same in Dodge This, as they are seen playing dodgeball against Benson's Ballerz.

All of the team members are wearing their bowling uniforms. They also carry their suitcases, which probably contain bowling gear and clothes. 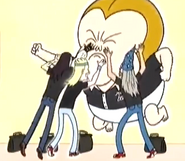 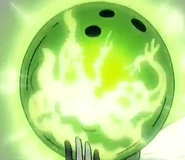 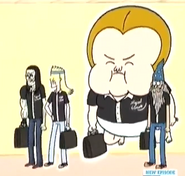 Retrieved from "https://regularshow.fandom.com/wiki/Magical_Elements?oldid=371040"
Community content is available under CC-BY-SA unless otherwise noted.