Leaders of the Dizzy World

Iacedrom and Ygbir are minor characters in Regular Show. They made their debut in the Season 2 episode "Dizzy".

In "Dizzy", they meet Pops when he falls to their domain, the Dizzy World, and gives him ice cream, explaining how they outlawed speeches (which is the reason Pops came there), making it illegal. They also made it illegal to not enjoy ice cream. When Pops unintentionally creates a speech while ranting to Mordecai and Rigby (who are trying to rescue him), Iacedrom and Ygbir get enraged and unsuccessfully attempt to kill Pops.

Iacedrom is the opposite version of Mordecai. Iacedrom wears a fancy black top hat. He appears as a realistic form of Mordecai. Both Iacedrom and Mordecai share similar voices and appearances. The only distinctions between them are that Iacedrom forbids speeches, whereas Mordecai often makes speeches in several episodes. Iacedrom can fly while Mordecai can't.

Ygbir is the opposite version of Rigby. Like Iacedrom, Ygbir wears a black top hat. He is the realistic form of Rigby. Ygbir also doesn't allow speeches. Ygbir and Rigby are both similar in voice and appearance. The only distinction between them is Ygbir is polite and confident towards others, whereas Rigby is very impolite and always has the urge to slack off. 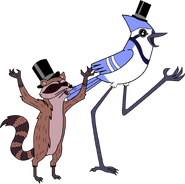