View source
watch 01:33
Wiki Targeted (Entertainment)
Do you like this video?
Play Sound

The Pilot" (unofficial)
"Just Set Up the Chairs (official)

Hi Five Ghost (also known as Hi Fives, HFG, or Fives), is one of the seven main characters in Regular Show. He made his first debut in the non-canon "Pilot." He also made an official debut in the Season One episode "Just Set Up the Chairs," alongside his friend Muscle Man.

Hi Five Ghost is a small ghost with an arm and hand sticking out from the top of his head. His body is white but slightly transparent. He does not seem to possess any eyeballs and his mouth is usually seen open when smiling or frowning.

During the time montage, Hi Five Ghost has grown a white goatee and has gained laugh lines, making him look older in appearance. He also wore two bracelets on his arm and a red beanie. However, during the Park's 25-year reunion, Hi Five Ghost strangely looks identical to his younger self.

While the majority of the time Hi-Five Ghost is quiet and stands in the background, he shown to be supportive, kind, logical, and sometimes scatter-brained depending on the time. He is very loyal to his best friend Muscle Man, always supporting him even when he's at his nastiest. Ironically, being a ghost, its been shown that the subject of death makes him incredibly sad as shown in "Trucker Hall of Fame." According to the scientist in "The Button," he states that Hi-Five Ghost is the most logical out of the park workers.

In "The Postcard" it is revealed that Hi Five Ghost met Celia four years ago in a coffee shop. They both realized they had a lot in common with each other. However, Celia explains how she has to go back to Prague to finish her studies. After figuring out a way to keep in contact (by sending a post-card after four years), they then leave the coffee shop. After not being able to read her post-card, and trying to find her location, Hi Five Ghost finally gives up, going to the coffee shop him and Celia visited four years ago. Here, he bumps into Celia, and they begin to talk once more.

In "Merry Christmas Mordecai", they are seen talking to Muscle Man and Starla. They also dance, and during a slow song, Celia kisses Fives under a mistletoe. In Hi Five Ghost's Halloween story "Going up" in the Terror Tales of the Park V episode, Fives is trying to get to Celia's floor at her apartment building while trying to get past the Elevator Repairman, who is later revealed to be a ghost haunting the broken elevator for 40 years. When the repairman grabs Fives, Celia is shown concern for her boyfriend when he is in trouble.

In "Rigby's Graduation Day Special," she shows concern for Fives when the Park blasts off into space. In "Welcome to Space," a picture of her and Fives is shown of her kissing Fives on the cheek, to show that she will still love him even if he is in space. In the "A Regular Epic Final Battle" epilogue, she and Hi Five Ghost are shown to be married after Fives returns from space and the both of them get married and become famous DJ's. They also have a son who is a half ghost-human hybrid. 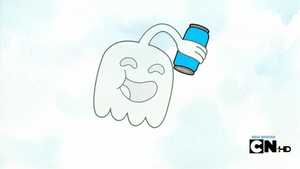 The gallery for Hi Five Ghost can be viewed here.