Gregg is a minor character in Regular Show. His first appearance was in the Season 4 episode "Caveman".

He was a caveman when Mordecai and Rigby found him in the cave, but when he was fully civilized, he basically became a human. Before being tested by Benson, Gregg asked the two if he could meet his old girlfriend Diane. When they agreed, she ended up releasing the rest of the cavemen, and they destroyed most of the park. However, Mordecai, Rigby, and Gregg lead the tribe back to the meat locker, where Gregg and his tribe ended up getting frozen once again.

When he was 100% caveman, he wore nothing but a loin cloth, when he became civilized, he had black shoes, tan jeans, a white T-shirt and a red sleeveless sweater. 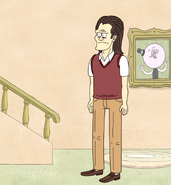 "One Space Day at a Time"