The Golf Cart (nicknamed Carty) is a Park vehicle that is seen in most episodes. Mordecai and Rigby are its most frequent users, but Muscle Man, Hi Five Ghost, Pops, and Benson also drive it, although less often. Skips is rarely seen using it, since he owns a van, and Pops owns a car, but he uses the Golf Cart more than he uses his it. Another golf cart also came to life and was destroyed in Out of Commission.

The Golf Cart is an average golf cart. It is mostly white, with grey poles on its sides to hold up the roof—which is white, a white seat, and a white body. Its wheels and tires are black. 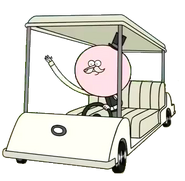 Retrieved from "https://regularshow.fandom.com/wiki/Golf_Cart?oldid=371696"
Community content is available under CC-BY-SA unless otherwise noted.