Gene is the former central antagonist of Regular Show. He is a vending machine who is the park manager of East Pines. He's also Benson's rival but they later become friends. His fate after the finale is unknown.

In the Season Three episode "Prankless", he tried to destroy the Park by having a huge prank war, but he is defeated in the end by Muscle Man, who uses mirrors to prank Gene in the East Pines watch tower.

He reappears in "The Christmas Special" by helping the park workers get to the lava pit quicker by holding off Quillgin so he can't get through. However, Quillgin and his men had taken Gene to the watch tower and tied him up with rope. He then proceeded to turn Gene facedown.

He later appeared in Dodge This, when he was defeated at dodgeball by Benson and the others.

He reappears again in "Thomas Fights Back". According to Benson, he and his goons steal the statue of Curtis Montgomery from the park every year. The guys then used their alien costumes to make them surrender, but Gene found out it was just Benson and the guys in their outfits. He ordered his men to fire, but luckily, Thomas fired a flare into the sky in order to save the gang. Later, Thomas pretended to become an intern named Nicholas in order to get the Park's statue back. He stayed at East Pines for thirty days in order to complete his mission. Gene later found out that Thomas removed the batteries of his walkie talkies, disconnected the gas pipes on the golf carts, and cut the emergency phone wires. Thomas also used Gene's voice on his phone to tell one of his men to open the gate, and Thomas, along with the rest of the park employees, managed to escape with the statue.

During the events of "Welcome to Space", he and the entire East Pines Park are launched into space to join the Spark Initiative.

Gene is a green vending machine with a green hat. Since he is a vending machine, snacks are seen through a glass window. Like Benson, he has an overcast brow and a very large triangular nose. 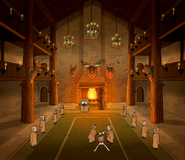 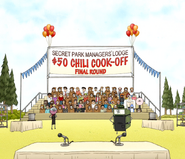