Frank Smith is a recurring character in Regular Show. He is Margaret's father and Denise Smith's husband. He makes his debut in "Family BBQ".

Oddly enough, Frank Smith is a human unlike the rest of Margaret's family. He has a large build, grey hair that used to be light brown, and a mustache and speaks with the impression of professional wrestler and former Governor of Minnesota Jesse Ventura.

Frank Smith is known be soft, with a rock hard exterior. He refuses to respect or give hand shakes toward any guy that his daughter brings home, unless they can do a better "mannonball" than he can. As a result, he is initially portrayed as petty, pulling demeaning pranks on Mordecai and refusing to acknowledge Mordecai's efforts to befriend him.

Frank revealed to Mordecai that the reason he acts the way he acts is because he was afraid that any boy Margaret dates will take his daughter away from him. Fortunately, Mordecai managed to convince Frank that his daughter will always love him and that he will always be her dad. Afterwards, he acknowledged Mordecai and is shown to like him as a person, even when Margaret and Mordecai don't "date" anymore. He often helps out Mordecai and even Rigby, showing loyalty towards those he cares for. He also seems obsessed with his chopper though his wife claims that is what she loves about him in "Family BBQ". He also proves to be a caring father and comforts Margaret such as in "Local News Legend" where he tells her she did a good job in regaining people's interest in the news, even if it ended up with lots of property damage and the death of an innocent cameraman.

At the beginning of "Family BBQ", Frank shows his instant hatred to Mordecai. He often ignores the helpful things Mordecai does, especially that he only does it so Frank could like him. When he challenges Frank to a cannonball contest, Frank wouldn't give up, and eventually would take things too far. At the end, Frank became friends with Mordecai after he admitted he was impressed that he would win a cannonball contest just for Margaret. Mordecai and Frank have remained friends ever since.

In "The Thanksgiving Special", Frank took Mordecai and Rigby around in Chopper 6 in order to go to the competition and to get the turkey.

In 1000th Chopper Flight Party", Frank is happy to see Mordecai, and even calls him his "son". When Frank finds out that Mordecai has a new girlfriend, he is upset. However, he still has his respect for Mordecai, and offers him a piece of cake for his girlfriend "JC". 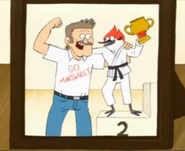 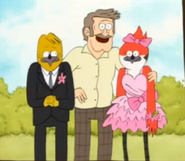