Doug "The Doppelganger" Shablowski is the primary antagonist in the episode "Temp Check", and has only appeared twice in the series. He is a serial shapeshifting scam artist whose strategy involves presenting himself as a drifter seeking work. Unaware of his criminal status and intentions, Rigby hires him as a temporary employee at the park to perform duties typically assigned to him by Benson.

His demeanor is initially lively and overly enthusiastic, despite Rigby's poor compensation and subpar accommodations during his stay at the park. Rigby quickly takes advantage of his seemingly kind-hearted nature by underpaying him.

His behavior begins to draw suspicion from Rigby when he makes subtle changes to mimic Rigby's voice and demeanor, then gradually copies his actual appearance. Finally during a confrontation with Rigby, he is able to fully replicate his physical form. To the dismay of the rest of the park employees, this makes him effectively indistinguishable from Rigby himself. They propose a series of physical and trivia challenges to them and although Doug is able to mislead them into thinking that he is actually Rigby, a discrepancy in one of their responses reveals the true Rigby to Mordecai as real Rigby hates hugging. Upon realizing his mistake, Doug attempts to flee but is quickly apprehended by Skips and placed in custody by the local authorities.

His true intentions are explained to the group by a police officer (presumably a detective). His criminal record warrants his incarceration for an undisclosed period of time. He is last seen restrained in handcuffs, but as a last sign of good faith he reminds Rigby that although he himself does not have much to be thankful for, Rigby does and should never forget so.

Doug is a brown otter with long black whiskers, rounded teeth, and a round, black nose. Like Rigby, he has darker brown lines on his fur and underneath his cap he has short brown hair. Upon arriving on a bus in front of the park, he wears a white, long-sleeved shirt, blue jeans with a belt, and a red and white trucker-style or baseball cap. However, within the park he wears nothing but only his cap to be naked like Rigby and Mordecai as usual. He also carries a suitcase covered in various nondescript stickers.

The Doppelganger, as his nickname implies, he's a shapeshifting capable to replicate another character's voice, appearance, personality, and general abilities using seemingly supernatural imitation abilities. Doug also seems to possess an uncanny ability to surmise a victim's psyche or at least guess their own memories. During a trivia test, he was able to correctly answer deeply personal questions about Rigby.

"If you don't mind me saying this you're the best boss I've ever had."

"Fired? You can't fire me. This is the best job I've ever had. I'm finally becoming somebody. Besides...I'm more Rigby than you ever were...or will be..."

"Rigby, I want you to know: Guy like me, ain't got a lot to be thankful for, but you, you got friends, a job, a nice warm bed, you got a good thing going here. Never forget that." 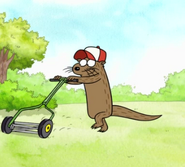