This article is about the character. For the episode, see "Don".

Don is Rigby's younger brother in Regular Show, despite being taller and classified as the older brother in his former friendship group. He makes his first appearance in the Season One Episode "Don" and is voiced by Julian Dean.

Don looks exactly like Rigby, taller than all members of the park and has a muscular build. Like Rigby, he has short spikey hair, brown and grey fur, black circles around his eyes, and a long tail with 6 dark brown stripes, and he almost never wears clothes. As a child, Don was almost identical to how Rigby looks currently, which gave people the impression that Rigby was younger than him due to being shorter. He wore a blue and white baseball cap with his name on it, and had buck teeth.>

Don is shown to be friendly and is able to perform his job with a positive attitude, unlike his slacker brother. He is shown to be affectionate, as he likes to give people "sugar", which is what he calls hugs. Don cares for Rigby despite the latter's resentment towards him. He is also generous such as when he allowed Rigby to borrow his car in "Gymblonski".

In "Don", the park is about to be audited due to Pops paying taxes with lollipops. Mordecai suggests they bring in Don, who is Rigby's younger brother and an accountant. Rigby is strongly against this, as he holds a long grudge against Don. In a flashback to Rigby's 6th birthday party, Don is shown unintentionally stealing Rigby's friends, ruining the party.

Despite Rigby's protests, Benson has Mordecai call Don, and warns Rigby to be nice to him or he's fired. After being called for help, he arrives at the park. Rigby, however, is not happy to see him and becomes grumpy. Don gives every park member a hug, calling it "sugar". When he tries to hug Rigby, he refuses. Rigby's hatred for Don grows, and while he and the park members are playing football, Rigby, who was hiding in the bushes, throws the football at Mordecai's chest, who went to retrieve the ball, angry that he and everyone else is enjoying Don's company so much. Eventually, when Don is almost finished with the taxes, Rigby hurts his feelings by once again refusing to give him sugar, and when Don asks if he did something wrong, Rigby says "Yeah! You were born!". Heartbroken, Don leaves the Park.

Rigby tries to finish the taxes, but he messes up, and the park begins to disappear due to the audit. After being motivated to get Don back, Rigby drives in the cart with Mordecai to Don's house. Here, Rigby explains why he's held a grudge over him for so long, saying that he's always been in his shadow and everyone thinks he's cooler than him, and everyone thinks he's the older brother. After we see a montage of Rigby's friends enjoying Don's company more than his as kids, Don immediately apologizes, saying that he was just trying to be cool like him. Don explains that he looks up to Rigby, which is why he gets his haircut like him, trying to look like him and don't wear clothes just like him. He even thought Rigby walking around naked was so cool. Rigby is flattered by this. The three go back to the Park to destroy the audit. Don is eventually almost done, but he discovers that he can't destroy the audit on the computer, so instead Rigby still has to give him sugar (which is an easy way to finish the taxes), which he does so. When the audit is destroyed, Don then leaves the Park before saying goodbye.

Don returns in "Bank Shot", where he gives Rigby advice on how to regain his edge in doing bank shots. He later watched Rigby's match against Cash.

In "Just Friends", Rigby and Eileen attend Don's ceremony getting his 5th-degree black belt in Tae Kwon Do. In "Gymblonski", after the cart's tire had blown out during Rigby's practice, Don lets Rigby borrow his car to use it for a "Food Run" against his nemesis Francis Jablonski.

In "Rigby Goes to the Prom", Rigby needs a car to take Eileen to prom. After asking, and being turned down by, a few people, he asks Don. Don said he would be happy to, but his car was destroyed in the "Food Run" in "Gymblonski". He tells Rigby he could borrow their dad's car, so Rigby unwillingly has dinner with his parents and Don. We see that Rigby and Don's dad, Sherm, favors Don much more than Rigby.

Don and Rigby's parents attend Rigby's high school graduation in "Rigby's Graduation Day Special". He also looks concerned when the Park dome leaves Earth and blasts off into space, along with everyone else.

Don is mentioned by Rigby in "Mordeby and Rigbecai". A mishap with teleporters causes Mordecai and Rigby to switch body types, with Rigby becoming tall with Mordecai's arms and Mordecai becoming short and having a brown body with skinny arms. Rigby enjoys his new tall body and says "In your face Don, wherever you are!"

Don and his parents came to see Rigby after being away in A Regular Epic Final Battle. 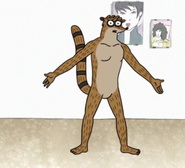 "Rigby Goes to the Prom"