Just Set Up the Chairs

Destroyer of Worlds is a video game character that spawned in real life due to the negligence of Rigby. Rigby pulled off a cloth that had originally covered the game Destroyer of Worlds, despite a sign declaring that the game was out of order. The Destroyer of Worlds came to life after Rigby and Mordecai read Skips' note, which said: "IN THE NAME OF ALL THAT IS HOLY, DON'T CONNECT THE RED WIRE TO THE BLUE WIRE." In disregard to this warning, they connect the wires, and a smoky version of the floating devil head appears and flies out of the room, causing the room to briefly encounter a blackout. The light from the game is then illuminated, and soon afterwards, the game explodes. This causes Rigby and Mordecai to fall backwards and a ray to shoot outwards, which forms the Destroyer of Worlds. Destroyer of Worlds shoots the wall and escapes into the park to wreak havoc. He appears to be nothing more than a pixelated floating devil head. His main enemy is the Lemon Chef, which is later controlled by Mordecai and Rigby. In the end, Lemon Chef ultimately ends up defeating Destroyer of Worlds. As a result, he turns into a cherry, and he is consumed by the victorious lemon chef. He is later revived by Garrett Bobby Ferguson in Exit 9B. During the fight, he faces off against the Lemon Chef, and they both collide together and disappear. Also, he is seen as a cameo in the episode Expert or Liar.

In the episode "Just Set Up the Chairs", he was destroyed by Rigby, who was piloting the Lemon Chef with the assistance of Skips and Mordecai. He was revived by Garrett Bobby Ferguson Jr. in "Exit 9B", but was again destroyed by Lemon Chef.

He is a giant, floating devil head with yellow eyes and a dark brown mustache and goatee.

He can shoot fire from his eyes and floats in midair. He seems to be invulnerable to anything that isn't digital (an example of this is when Rigby tosses a rock at him - it bounces off of him and he gets mad).

"Just Set Up the Chairs" 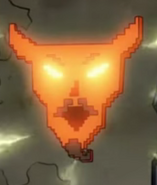