Death is a recurring character in Regular Show. He made his debut in the Season 2 episode "Over the Top".

As the Grim Reaper himself, Death is incredibly cruel, ruthless and sadistic. He shows pleasure in collecting souls and enjoys seeing others in pain, such as when he laughed at Skips struggling for his life while arm-wrestling him. He is also shown to have a short temper, such as throwing the Soul Ball at Rigby instead of just handing it to him after he won it.

Despite this, Death has many honorable qualities. He always keeps his end of a deal and even gives praise to those he respects, such as when he complimented Mordecai and Rigby as the "best babysitters he's ever had". He also deeply loves and cares for his wife and son.

Death represents an undead skeleton-like figure, with a slim body, greenish-white skin flaps. Several skin flaps segment his mandible from his upper jaw (once compared to shredded Parmesan by Rigby), which give the allusion of a mustache and sideburns. He also has very dark brown neck-length hair, and empty eye sockets.

Death's attire is composed of British biker clothes. He wears a black motorcycle jacket, a grey sleeveless shirt, and a torn hoodie around his neck. Both the shirt and the hoodie scarcely hide his rib cage. When he removes his jacket, Death's right arm is shown to be abnormally muscular. His lower body is dressed with a pair of blue jeans tied up with a taupe belt and skull shaped buckle. A small chain is dangling from his left back pocket. On his feet, Death wears a pair of brown leather shoes with pointed tips. On occasion, Death wears sunglasses, a biker's helmet and a knapsack.

Death came into existence in prehistory, acted as the grim reaper for years, taking the souls of many who's time to die had come. Skips' being granted immortality by The Guardians of Eternal youth greatly irritated him, and he kept saying he would take his soul eventually, although he never got to. Death apparently entered plenty of eating challenges, and never lost.

Death's first appearance was in Over The Top, where Skips had accidentally killed Rigby. He appeared to take Rigby's soul before Skips made a deal to bring him back. After cheating Death, he comes forth with his end of the deal and brings Rigby back alive. Before leaving he tells Skips that someday he will have his immortal soul.

As the personification of death itself, Death is extremely powerful, being able to rival and hold an advantage over Skips in their armwrestling, implying great strength. Death also has power over souls, and can teleport to the underworld and back via his motorcycle. He can also teleport in a blaze of fire, and manipulate souls to a considerable extent. It is presumed he has the same powers Thomas has, but to a much higher degree. 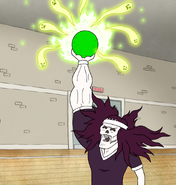 "The End of Muscle Man"

"Dumped at the Altar"