Corny is a minor character as well as a talking can who appeared in the Season 7 Episode "California King".

He was bought by an unnamed mother and her child. After the child ate his insides he was thrown away. He sees his previous owners as his family. When Mordecai and Rigby meet him he doesn't want to help them and leaves. Later, when they meet again and Rigby mentions that his trampoline was like a family member to him, Corny remembers his past and shows them a shortcut. When he sees that Ziggy doesn't want to listen to Rigby he tries to convince him but gets thrown out of a window. Later, when Ziggy tries to crush Mordecai with a trampoline, he jumps through a hole in the roof and lands on Ziggy, thereby knocking him out. To the question what Rigby and Mordecai can do for him for saving them, he just answers that he wants to be recycled. Since then he is used as a flower pot in Mordecai and Rigby's room.

Corny is a can with a blue-green label that has the word "CORN" on it and an ear of corn underneath it. 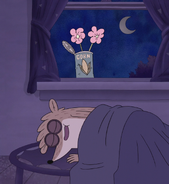