The Coffee Shop is a main location in Regular Show. It is frequently visited by Mordecai and Rigby, where they are seen to be having coffee and talking with Margaret and Eileen.

The Coffee Shop contains several tables and stairs leading to the exit, with one television that Mordecai and Rigby watch, as seen in "The Unicorns Have Got to Go", "It's Time", "Camping Can Be Cool, and "Cruisin'". There have been a few instances where "Open Mic Nights" were held, as seen in "Mordecai and the Rigbys," "Return of Mordecai and the Rigbys" and "Cube Bros". However, there have been no other notable events to occur at the Coffee Shop. An arcade game called Broken Bonez was also shown in the Coffee Shop in the episode "High Score". It has not been shown in any other episode. 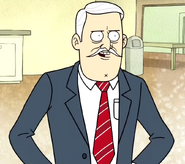