Meet the Seer (on security camera)

The Coffee Bean & Translator are minor characters, who serve as the antagonists of "Caffeinated Concert Tickets".

The coffee bean wears a white headband and underwear. He can only say the word "coffee" and has the ability to squirt hot coffee from his nipples and hands.

The translator's outfit consists of a green or teal suit jacket, matching pants, a brown tie, a white collared Fist Pump T-shirt, and glasses. He is tall, slim, and of Asian descent. He seems to be the only person who understands the Coffee Bean, as all he ever says is the word "coffee." He owns a chainsaw and is a Fist Pump fan just like The Coffee Bean, Mordecai and Rigby will do anything for tickets. 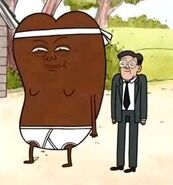 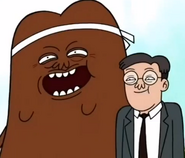