Carl is a minor character in Regular Show. He made his debut as the antagonist in the Season Eight episode "The Dream Warrior". He's a Nightmare Alien that works for Anti-Pops.

Carl belongs to a bizarre alien species known as Nightmare Aliens. His skin is bright purple. His head resembles the one of a Hammerhead shark, featuring a beak-like mouth with actual teeth and purple, insect-like eyes. His arms and feet are long and skinny, but despite this he seems to be very strong. He wears a grey and white coat. Since he never wears it off, not much is known about his body, but he seems to have ten pectorals (due to the marks in the coat).

Not much is known about his personality, but we know he is persistent and loyal to Anti-Pops, even looking like an evil being himself, instead of just a henchman. He seems fearless due to his strength; however, he can also get nervous and scared when facing high danger, such as when Pops starts to use his powers on him.

Carl was sent by Anti-Pops to invade Pops dreams and force him to give him his address. This consequences Pops getting scared in the dream and using his powers on reality without knowing, making it very hard to sleep for his roommates. After many trials to make the nightmares end, the Alien keeps sneaking into the dreams and scaring Pops, but never getting his address, and only getting to hurt Pops' friends.

Finally, after being informed by Recap Robot about the existence of a Nightmare Alien, Skips manages to get everyone inside Pops'. However, the alien manages to knock everyone out of the dream, leaving Pops all alone and very afraid. Then, Pops' fear turns in rage, and he starts to use his powers to punish the alien, discovering he was sent by somebody else and telling him his address in the process. As of this, Pops nightmares end.

After this, Carl wakes up from a machine he used to infiltrate on dreams and goes to Anti-Pops to tell him where Pops lives, highly threatening the Space Tree. 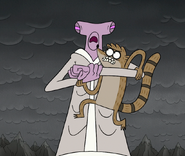