The Bodybuilder is the main antagonist of "Rigby's Body". He is a pink, bodiless consciousness who was once human and took bodybuilding too seriously. His friend told him that if he kept pumping iron like that, his body would quit on him (which it did). He didn't find it in time and had to take the form of a basketball, while his old body remains dead. He is probably in the form of a basketball because in his human form, he was athletic and strong, and a basketball is a sports reference. When he made contact with Rigby, he finds and steals his body. They fight later in the episode. Skips drove the golf cart into Rigby's body, which sent the Bodybuilder's consciousness crashing into a slide. He ended up taking the form of it, and then became disgusted that his mouth was open when a fat kid's butt slid over him. 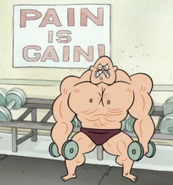 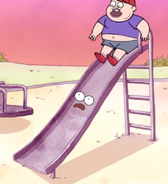 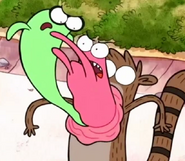 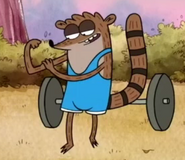 Retrieved from "https://regularshow.fandom.com/wiki/Bodybuilder?oldid=369214"
Community content is available under CC-BY-SA unless otherwise noted.