Members of a blonde society

Bet to Be Blonde

The Blonde Men are a cult with blonde hair, which is really just bleached with hydrogen peroxide, who befriends Mordecai (who was actually wearing a blonde wig) at The Coffee Shop in "Bet to Be Blonde".

They play video games, golf, watch movies, eat tacos, and other "cool" things that Mordecai (along with Rigby) enjoys. If any of them are friends with an outsider who is not blonde, that friend must turn blonde.

They first meet Mordecai when he ditches Rigby for them. They say normal people are jealous of them. Soon he starts hanging out with them. Mordecai later decides to move in with them. Later after a jog they captured rigby and order him to be killed. When they find out Mordecai is wearing a blonde wig, they try to kill him and Rigby. The whole organization is killed in the crossfire after Mordecai sets one of their rings to self-destruct and it explodes (While some of them died by Mordecai's laser ring). The leader has 10 rings on each finger (excluding his thumbs) and the words "BLOND 4 LYFE" tattooed on them, meaning that he actually has 12 fingers. Then the leader puts a giant ring around the center of his head. Their leader is enormous, being larger than any of the others. The Blonde Men (except their leader) were revived by Garrett Bobby Ferguson Jr. in "Exit 9B", but were sent back to the afterlife in the end. 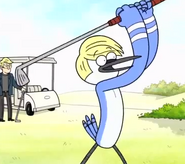 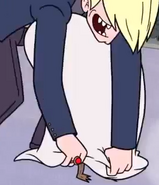