Host of Expert or Liar

Bert Coleman is the main antagonist of the episode "Expert or Liar."

He has orange hair and sports a massive smile which exposes his gums at all times. He wears a gray suit with a white shirt underneath, as well as a red tie. He appears to be at least six feet tall.

Bert has a bad habit of antagonizing the contestants of his game show. He even goes as far as having his co-workers punching them and calling them names in order to humiliate them on national television. He tried his hardest to prevent Rigby from winning Expert or Liar and laughed in his face when he thought he got the last question wrong. His personality can best be described as cold-hearted, cruel, uncaring, and sadistic.

Bert Coleman is the host of the popular game show, Expert or Liar. In the game show, he disguises himself as random people and asks if the person helping him is an expert at what they do. If they respond yes, he exits his disguise and challenges them to find out if they are really an expert or if they are a liar, hence the title of the game show.

During the episode, after humiliating Rigby on the penultimate episode of a season of his show, Rigby seeks out revenge. After tricking Bert into letting him back onto the show (even though "repeat guests" are forbidden), Bert brings Rigby to a video game-esque dimension, and asks Rigby questions. After revealing himself as a video game expert, Rigby punches Bert off of a platform, sending him falling into a pixelated version of Garrett Bobby Ferguson's mouth. 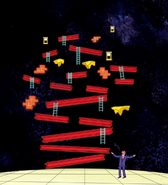