Archie the Archivist is a character that appeared in the episode "The Last Laserdisc Player".He makes a reappearance in the episode Format Wars II where it is revealed that he has a son named HD DVD who he never met before.

In the episode "Format Wars II", the Archie and his laserdisks are shown to be more popular than ever and living quite happily thanks to Mordecai and Rigby. However his joy is cut short when he hears news that a new format exists and is taking out the other obsolete formats. With the aid of Mordecai, Rigby and Benson, and the remaining Guardians, they prepare to wage war against the mysterious format who is soon revealed to be DVD. As their epic battle commences, DVD reveals that is the Laserdisk/Archie's son whom Archie was unaware of and DVD's whole war was an attempt to get back at his father. However Laserdisk reveals that he had no idea much to his grief and DVD reveals that his first words were "Laserdisk Rules" which greatly moves Archie and both him and his son reconcile. While reconciling with his son about their past mistakes, DVD's former henchmen, Internet kills Archie then turns against his own creator, DVD. After the second Format War is supposedly over with the supposed defeat of the Internet, Archie is seen as a ghost, watching a movie together with his son and the rest of the gang, but all were unaware that the Internet was still alive and was plotting against them.

Archie is a tall human that has grey/brown hair and a mustache. He also wears glasses and a suit. In his Laserdisc Guardian form, he appears as a giant, golden crystal-like monster. 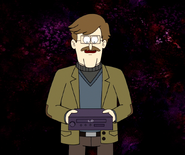