View source
watch 01:32
She-Hulk Trailer Dropped - The Loop
Do you like this video?
Play Sound

Evil overlord, Destructor of universe, being a complete unit

Anti-Pops, a.k.a. "He Who will Erase Us" and real name Malum Kranus is the main antagonist of Regular Show. He is also the last and most powerful villain and he made his first debut in the Season Eight episode "The Dream Warrior". He later made a full appearance in "Space Escape". He looks exactly like Pops, except that he as an entirely black appearance all over his face and body and is also evil. He is Pops' illegitimate brother, and both siblings were born on their home planet Lolliland. For reasons this hasn't been revealed, other than having born with a completely different gift, he wants his brother dead. Mordecai and Rigby gave him the nickname "Anti-Pops" after they first saw him. In the finale, he dies with his brother Pops, showing some remorse for his past actions.

According to the chronicles of Lolliland, Anti Pops or Malum Kranus was born in order to balance with his brother Pops which is considered the most powerful being in Lolliland. Due to their personality difference and power, both beings fight each other with Pops wanting to save the universe and Anti-Pops wanting to destroy the universe. The fight usually ends in a stalemate where they punch each other that the universe reset once more. It is unknown how many times this happened but it can assume a lot with Earl's tattoos and memory with the last battle. Now, Anti-Pops is back to destroy the universe and battle his brother.

The Search for Pops

While the Park gang is in the Space Tree and before, Anti Pops managed to build an army and lived in a space station where it served as his HQ. During his time, he usually gives bad reviews and 1-star ratings to online food websites even he didn't visit them or eat himself.

He hired Carl, a nightmare alien to track Pops down. The alien managed to find the location albeit beaten up by Pops in his own dream. Having the location, this gives Anti Pops and his army to attack the Space Tree to kill Pops before he restores his original being. He is first spotted by Mordecai and Rigby when they are shopping for a graduation party when he joined his soldier hurrying the cashier for the change. Anti-Pops later erase the cashier to get back to his ship for the Space Tree invasion. His army managed to capture the Space Tree but Pops and his friends escaped. He was distracted by a flying spaceship to realize that it was a distraction for Pops to rescue the prisoners. All the Space Tree personnel escape and battle against the Anti-Pops army. Anti Pops space station used a tractor beam to attract the Park dome but Chance Sureshot sacrificed himself by shooting the gunner while in space, giving time for the Space Dome to escape.

Despite losing Pops, he have put a bounty on Pops in hopes of capture or kill him. One bounty hunter attempted to capture Pops in the Umak shop but was stopped.

He is similar to his brother, Pops, but all black around him and fully glows white, in addition to a black colored cape. In the finale, he's revealed to have a 24-pack.

A complete opposite of Pops, Anti-Pops is a rude, tyrannical, homicidal, ruthless, destructive, malevolent, and genocidal entity bent on destroying all existences in the universe. He is also extremely picky on food and beverage as he often tries to rate the lowest rank (often one star) for any kind of online food and beverage services, which displeases him. On one occasion, he is enraged to know that he cannot post a negative star for bad service.

After being defeated by Pops due to an interference of time-traveling Mordecai and Rigby, Anti-Pops was afraid of dying at the same time that he and his brother die together to the sun during his brother's suicide sacrifice to stop Anti-Pops' terror. But he did show remorse for his past actions and gave his brother a hug to atone them.

He shares his brother's cosmic power in telekinesis, energy manipulation, and teleportation. However, he has a power that is unique to him in which he can erase anything and anyone out of existence in the form of glitches. He is also extremely strong, having a twenty-four pack of abs.

He was defeated from Pops' hug and died from burning in the sun, along with Pops, thus, he is now in the afterlife.

"The Key to the Universe"

"No Train No Gain" 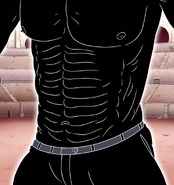 The Power (Part 3)
Português do Brasil
Community content is available under CC-BY-SA unless otherwise noted.
Advertisement