Alpha-Dog is a minor character in Regular Show. He made his debut in the Season 3 episode "Rap It Up". He is the leader of the rap group "CrewCrew" voiced by rapper Childish Gambino.

He wears a turquoise and white cap, a red plaid shirt, black jeans, and white shoes. He also has a red lollipop in his mouth. 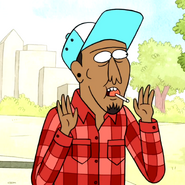 Retrieved from "https://regularshow.fandom.com/wiki/Alpha-Dog?oldid=374087"
Community content is available under CC-BY-SA unless otherwise noted.